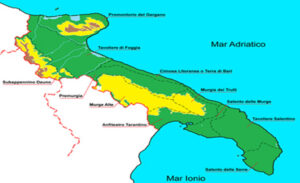 A few weeks ago, a network of small companies started building a Tourist Area Brand in the Salento delle Murge area.

Sub-regions do not have well-defined boundaries and their classification is based on territory’s physical and anthropic characteristics.

We find traces of “Salento delle Murge” in geography texts, in educational research, in technical reports by professionals such as architects and researchers of the rural development of the territory, and in tourist websites, but the term is totally unknown in common language, even by the community living there.

When reference is made to Salento, it is necessary to specify the context: geography, culture or tourism. 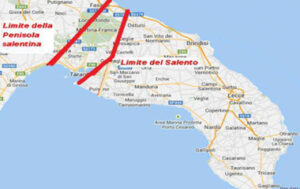 From a geographical point of view, Cosimo De Giorgi defined the Salento as a line joining the innermost point of the Gulf of Taranto on the border of the territory of Massafra, with Pilone, a hamlet of Ostuni.

From a cultural point of view, ‘Salento’ is instead identified by a line further south, starting from Taranto, passing through Grottaglie, San Michele Salentino and Ceglie Messapica and ending in Ostuni.

In common language, the name Salento is immediately identified with a territory that only includes the province of Lecce.

The term Salento is therefore associated with the Salento tourist brand.

From a geographical point of view, Salento delle Murge is included between two very strong brands: Salento and Valle d’Itria, two territories that have been able to enhance and identify themselves over time.